Green hydrogen not the only option

India is accelerating its green agenda towards hydrogen as the economy driver. Adoption of the Hydrogen Economy is important for India as it creates energy security for the country in the face of increasing oil prices and complex supply negotiations and trade-offs. In addition, there are multi-fold benefits of enhancing foreign exchange reserves, boosting our ability to create more favourable trade deals, reducing domestic oil prices, reducing inflation, enhancing export competitiveness, raising national GDP, and thus raising the overall standard of living and care for the citizens of the country.

Significantly, according to Cefic (the European Chemical Industry Council), "it is possible to convert renewable hydrogen into liquid fuels such as ammonia (NH3), methanol (CH3OH) or synthetic fuels (using Fisher-Tropsch chemistry). In addition to methanol being used as a transport fuel it can also be used as a feedstock to make olefins and aromatics." The favourable impact of this decarbonisation of the economy and freedom from reliance on oil imports will also give added benefits of reduced pollution and allied health impact on national productivity.

Electrolysis is the dominant process for producing Hydrogen at large scale and India does have proven expertise in its usage in extraction of metals (Aluminium and Zinc), and production of chemicals. There are multiple Hydrogen electrolysis technologies with Alkaline, PEM, and AEM being more flexible than solid oxide process. All these are being further innovated to enhance efficiency and reduce costs. The common factor in all Electrolysis technologies is the use of massive amount of electricity in production.

Herein lies the huge challenge in realising the country's and the world's hydrogen vision especially when it is rooted in the premise of green only.

India's current total power generation capacity is 390.79GW of which 234.44GW is produced in thermal plants and only 103.06 GW produced by renewable sources. India's energy demand was projected to increase by almost 50 per cent between 2019 and 2030. This was before the pandemic and has currently been downgraded to 35%. However, with the economy again coming on the fast track there is no reason why the estimate will not be back to the 50% mark and may be further enhanced in future if we continue to grow rapidly. This means an electricity generation capacity augmentation at a gigantic scale. At the time of projecting these numbers in 2018-19 timeframe Hydrogen economy agenda was not so clear. Now we are looking at a scenario where additional gigantic increase is required in electricity generation capacity, and it needs to be completely in the renewable arena to fulfil the green hydrogen vision.

India is already lagging in its current roadmap of renewable energy and therefore we seriously need to augment our Hydrogen making capacity with blue and grey hydrogen in the near term till the renewable energy gap is met. Adoption of blue and grey hydrogen as a stop gap measure will still enable all the benefits of the green hydrogen economy albeit at a lower scale which is hugely preferable over letting the status quo prevail in the interim. 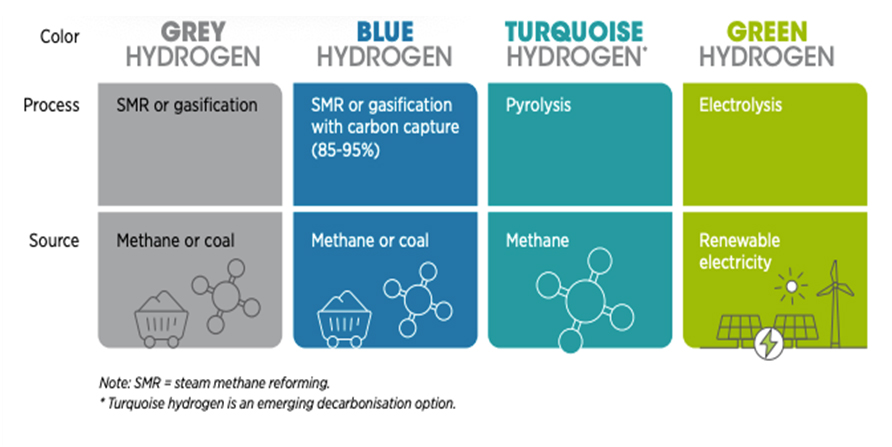 When hydrogen is produced by steam reforming of natural gas or methane it is referred to as Grey Hydrogen. The estimated reserves of Natural Gas in India in the year 2020 were at 1371.89 Billion Cubic Metres. India currently produces and consumes approximately only 32-35 Billion Cubic Meters(BCM) off Natural Gas thus presenting a huge possibility for delivering on the hydrogen economy of the grey kind. Methane on the other hand is a polluting greenhouse gas and emerges from agriculture, coal mines and production of Natural Gas and fossil fuels. Any methane that we are able steam reform into Hydrogen will have a double beneficial impact of lowering greenhouse gasses thus helping India meet its global commitment and pushing the Hydrogen vision forward. Gas venting is a standard practice of the petroleum extraction industry where Natural Gas and Methane is released in the atmosphere. The beneficial use of this vented gas in producing Hydrogen will also help the oil drilling industry to become green while their traditional business lives its natural lifespan.

This same grey hydrogen can be made into Blue Hydrogen when we are able to ensure that no carbon emission in the steam reforming process is allowed to escape into the atmosphere. They need to be trapped using industrial carbon capture and storage (CSS). While the goal is to capture and store 100% of the carbon in reality this number is at around 20% and thus Blue Hydrogen is actually low carbon in nature.

Hydrogen production from Coke Oven Gas (COG) has also been successfully demonstrated by multiple organisations globally. The steel industry is a major producer of COG in their normal process. Coke oven gas is the by-product of converting coal into coke used in steel production, and India is the third largest producer of steel globally. Thus, COG would be a perfect addition to India's hydrogen vision - even though the Hydrogen produced will not be green as per global classification it will still make a sizeable difference.

The industrial sector releases a huge amount of purge gas which is generally rich in hydrogen compounds. These too can be used to produce hydrogen that will add to the hydrogen vision of India.

The emerging Hydrogen economy will also create a ripple EPC impact. Industries currently producing waste Hydrogen will have a new source of income in addition to carbon credits. In all these endeavours to supplement India's Hydrogen requirement for the H212 aspiration the EPC industry will be an important partner. The Indian EPC industry has matured and become technologically strong in the last 2 decades and is competing with the best in the world. We ourselves at Nuberg EPC are building advance manufacturing facilities in numerous countries and are also involved in 3 clean energy projects in India already.

The EPC industry will thus take pride in partnering the Indian government in fast-tracking Hydrogen production infrastructure enhancement across multiple sources in addition to setting up the infrastructure for Green Hydrogen.

© This article was first published in EPC World, Jauary 2021.

EPC World - Green hydrogen not the only option

Industry Outlook - 25 Years of global EPC made From India