A World of Sulfur

AK Tyagi, Nuberg EPC, India, takes a detailed look at the production of sulfur and provides a case study on a plant installation in Egypt. 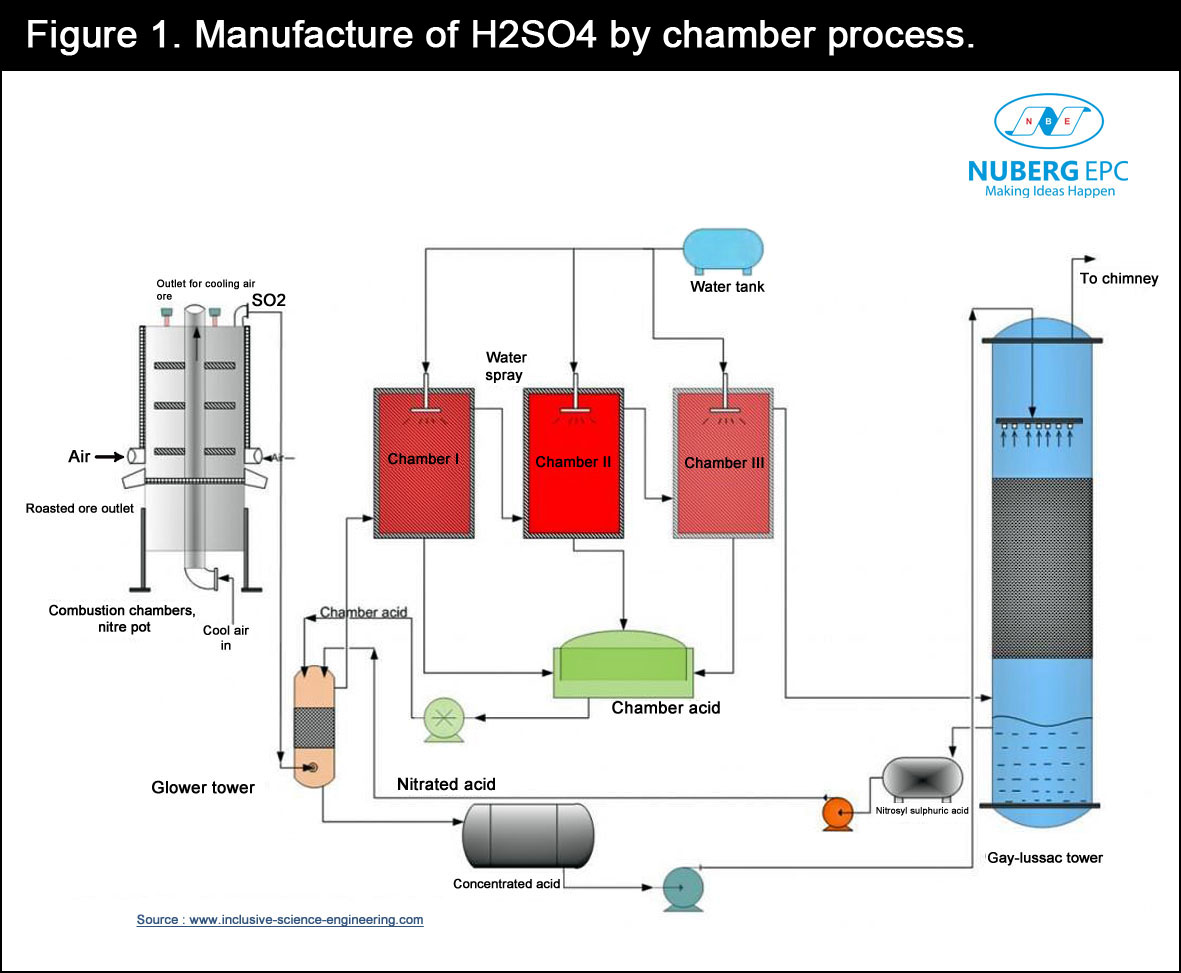 World Fertilizer Magazine, November 2018. Sulfuric acid is one of the most important mineral acids that has a lot of applications in the chemical industry. It is a viscous liquid that is colourless, odourless, and soluble in water. Its solubility in water releases a lot of heat in a reaction that is highly exothermic. Sulfuric acid occurs naturally as sulfide minerals in rocks. However, dilute forms of sulfuric acids occurs naturally in the atmosphere following the oxidation of sulfur dioxide in the presence of atmospheric moisture. Following the huge applications of sulfuric acid, it is required in huge quantities. Hence, sulfuric acid is manufactured commercially by the reaction of sulfur trioxide in the presence of water in a process known as the contact process. Generally, the processes involved in the manufacture of sulfuric acid have undergone a series of evolutions. In the 18th century, the contact process was developed by Rudolf Messel and Peregrine Phillips. Initially, the process utilised a more expensive platinum metal as a catalyst. However, it was then replaced by a much cheaper vanadium oxide catalyst which is still in use today. Currently, it is not out of place to say that there is a positive correlation between the level of a nation’s development and its demand for sulfuric acid; several countries are keying into this.

The sole time the demand for sulfuric acid witnessed a dive was during the global economic crisis in 2009. However, there was an upward trend between 2010 and 2012. Currently, the global production of sulfuric acid stands a t more than 270 million t and this figure is expected to increase. So far, there are five countries that rank as the leading producers of this chemical. Leading the chart is China, whose production output stands at more than 74 million t. The US sits second with more than 37 million t, India produces 16 million t, Russia accounts for 14 million t, and Morocco produces 7 million t of the world output. Generally, these five countries account for approximately 61.5% of the global production of sulfuric acid. Currently, the fertilizer industry consumes more than 55% of the world output. At this rate, there is no doubt that the need for sulfuric acid cannot be overemphasised. In 2016, the global sulfuric market was valued at US$10.1 billion. It is estimated that this figure will reach US$15 billion by 2025. Likewise, it is anticipated that the global demand is rising exponentially, while there is a need for an increase in production to meet this demand. 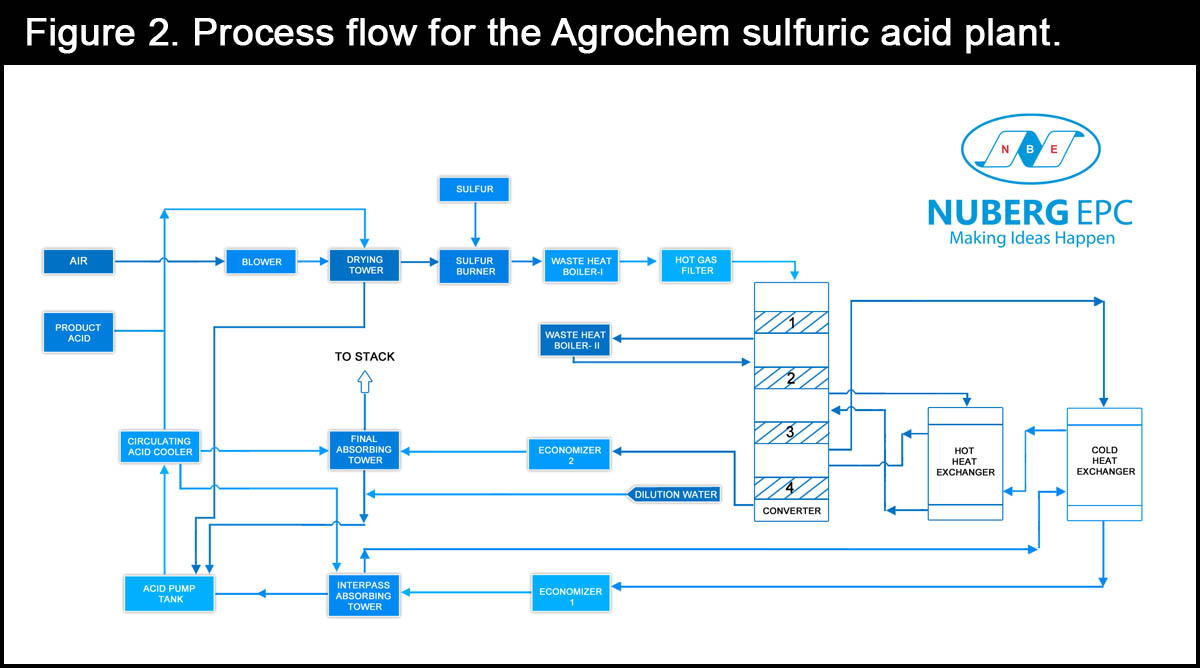 There have been evolutions in the methods for the production of sulfuric acid, however, there are two major processes for its commercial production. There is the lead chamber process and the contact process. Irrespective of the difference in the processes, the manufacture of sulfuric acid is generally based on the following principles: 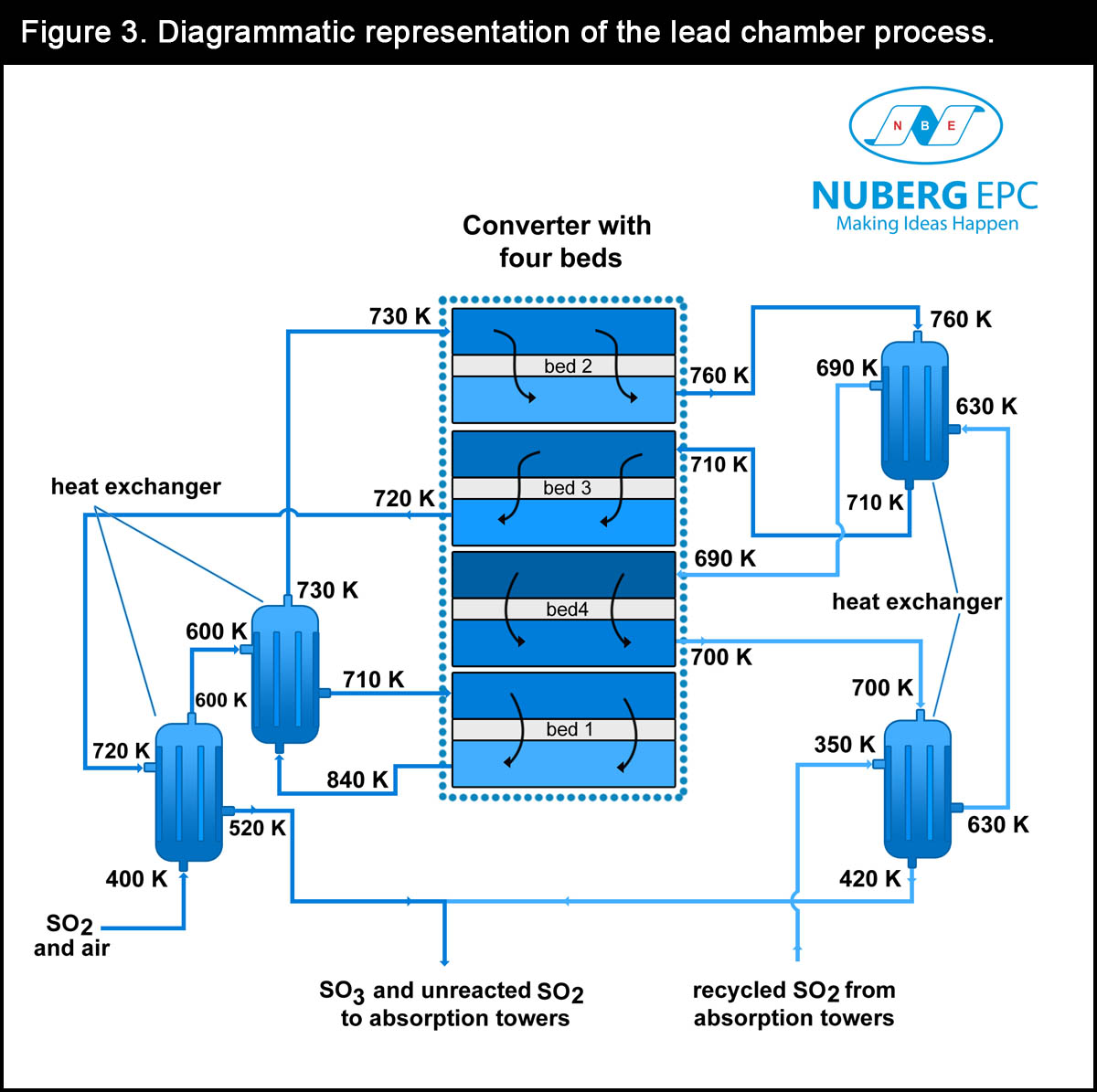 This is an almost obsolete process for the production of sulfuric acid. However, it is worth discussing since it is still in use in some countries around the world. The name ‘lead chamber process’ is hinged on the fact that the process takes place in a lead chamber. In summary, the lead chamber process involves the oxidation of moist sulfur dioxide (SO2) in the presence of a catalyst (nitrogenous oxide) to produce sulfur trioxide. The resulting sulfur trioxide then reacts with water to produce sulfuric acid. The summary of the process is described by the equation below:
2SO2 + O2 → 2SO3
SO3 + H20 → H2SO4
Hot sulfur dioxide is passed into the lead chamber from the Glover tower. Afterwards, it is washed using nitrous vitriol. Sulfur dioxide is then oxidised to sulfur trioxide. This is then dissolved in acid wash resulting in the formation of Glover acid, which is approximately 78% sulfuric acid. At this point, the glover tower contains a mixture of gases, such as oxygen, nitrogen, nitrogen oxides, sulfur dioxide, and steam. All these are then passed through the lead chamber where they further react with water to form sulfuric acid. This is then collected on the floor of the chamber. The lead chamber has a series of chambers ranging from three to 12. The gases produced are often referred to as chamber acid or fertilizer acid, and contain between 62 – 68% sulfuric acid. Lastly, the unreacted sulfur oxide and nitrogen oxides are recycled as the process is repeated again.
The summary of the process is shown in Figure 1.

Background of sulfuric acid in the fertilizer industry

The application of sulfuric acid is not limited to the fertilizer industry. It fi nds a useful application in several another chemical processes. However, there is no doubt that a greater percentage of global sulfuric is used in the manufacture of fertilizers. 100 million tpy of phosphate rocks are processed using the wet method involving sulfuric acid. The result is the production of phosphoric acid or the resulting calcium salts. In a typical process, fl uorapatite is treated with sulfuric acid to produce phosphoric acid, hydrogen fl uoride, and calcium sulfate. In another reaction, phosphoric acid can also be converted to ammonium phosphate which is another important fertilizer.
Ca5F(PO4)3 + 5H2SO4 + 10H20 → 5CaSO4.2H2O + HF + 3H3PO4
Likewise, the reaction of sulfuric acid and ammonia resulting from the thermal decomposition of coal results in ammonium sulfate.
2NH3 + H2SO4 → (NH4)2SO4
Following the increasing need for agricultural products across the world, there is no doubt that the fertilizer industry still remains the highest consumer of sulfuric acid globally.

The production and application of sulfuric acid can result in serious deleterious effects. So far, the industrial process is the major source of sulfuric acid related pollutants. These include the manufacturing process, its application in the production of fertilizers, smelting of metals, refi ning of petroleum, lead-acid accumulators, and other processes. These processes result in the emission of SO2 into the atmosphere. Even though the concept of climate change is still a huge controversy, there is no doubt that the effects of SO2 emissions can be catastrophic. SO2 emissions are the major cause of acid rain. In the short term, this could result in the contamination of plant and animal life. In regards to human contamination, sulfuric acid can be inhaled or absorbed through the skin resulting in serious burns. Thus, there are strict regulations regarding SO2 emissions globally. There is also the need to create a balance between the needs of the fertilizer industry as well as minimising the emission of SO2. Therefore, Nuberg EPC has improved the confi gurations of sulfuric acid production plants to handle emissions and other forms of environmental contaminations associated with the production of sulfuric acid.

Since 1996, Nuberg EPC has successfully commissioned several sulfuric acid plants across the globe: one of them is situated in Egypt for Agrochem. This case study shares the insights and challenges faced throughout the entire process. 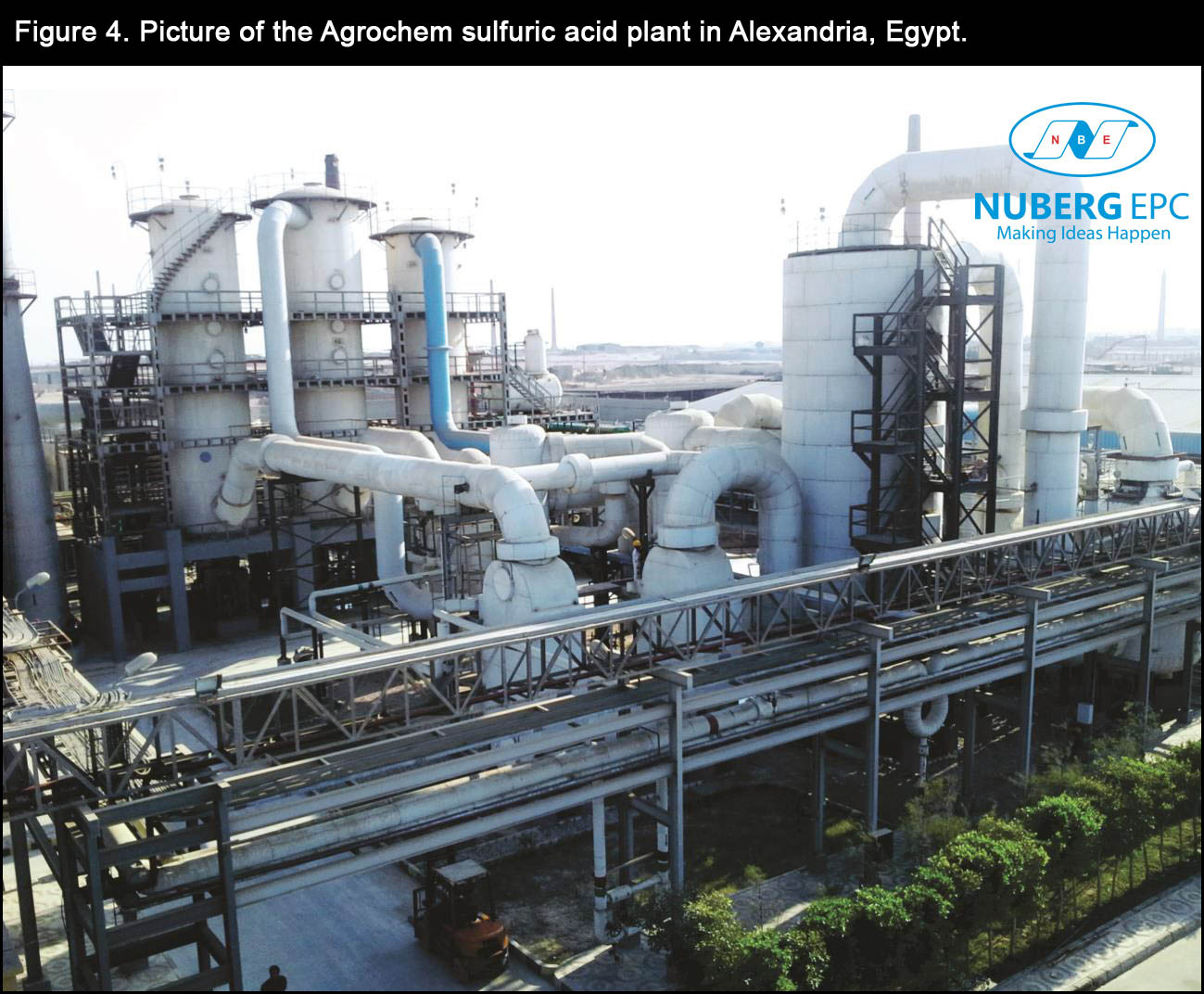 The company reached out to Nuberg EPC relaying its desire to construct a brand new sulfuric acid plant in Egypt. Nuberg EPC took immediate action with shop drawings and basic and detailed engineering surveys of the proposed site. Afterwards, the company sourced suppliers to procure the best materials for the project. The scope of the project included process, technology know-how, basic and detailed engineering, design, procurement, manufacture and supply of plant equipment including complete erection, construction, project management, commissioning, and startup of the plant. After several months of hard work, the plant was successfully commissioned in 2012 and currently operates on double contact double absorption (DCDA) technology.

The scope of the project includes the EPC and LSTK of a 300 tpd sulfuric acid plant. An overview of some of the key equipment and machinery for the project is presented below.

These include (but are not limited to) basic engineering packages as follows:

In addition to the basic engineering packages, details about each individual component and process were also stated with accompanying documents. This section covered key engineering design features such as:

Nuberg EPC's project managers plan ahead ensuring that every single step is executed to meet the already set out success criteria within the limits of the specifi ed time for the project. Likewise, the same process was applied to the Agrochem project. Some of the major key pointers in the project management processes include the following:

The Nuberg EPC process for the production of sulfuric acid is in line with the contact process already described. The process involves using vanadium pentoxide (V2O5) as the catalyst. The process fl ow for the Agrochem plant is shown in Figure 2.

Commissioned in 2012, the Agrochem sulfuric acid plant in Alexandria is the fi rst turnkey project executed by Nuberg EPC in Egypt. Based on DCDA technology, the plant produces sulfuric acid (98%) used mainly in the fertilizer industry in Egpyt. Nuberg EPC provided plant engineering and construction services that helped Agrochem to run a safe, reliable, and environmentally friendly plant. The project scope included engineering, technology know-how, global procurement, and construction of all process facilities, including a sulfuric acid plant, utilities, storage, and other required units.

Sulfuric acid is one of the most commonly used industrial chemicals in the world. In the last few years, growth in the sulfuric acid market has been driven by fertilizers using phosphates, such as diammonium phosphate (DAP), monoammonium phosphate (MAP), triple superphosphate (TSP), and single superphosphate (SSP). With the growing demand in agriculture, infrastructure, metal processing activities, and usage in chemical synthesis such as hydrochloric acid, synthetic detergents, nitric acid, dyes and pigments, and sulfate salts, the sulfuric acid market is expected to grow further.

This article was first published in World Fertilizer Magazine in November/December 2018.