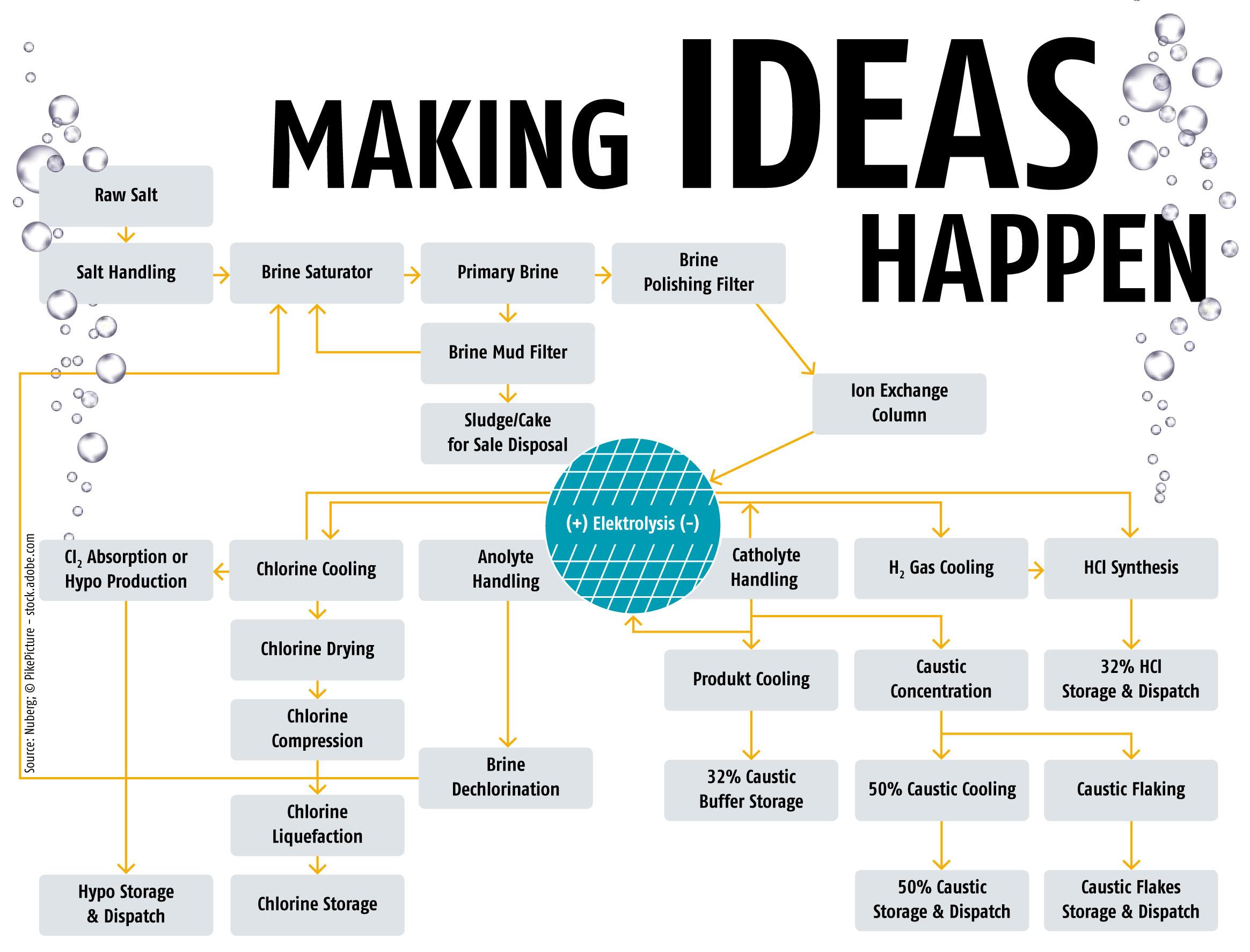 Tackling the chlorine challenge: Delivering a complex chlorine alkaline project in the Middle East - Managing turnkey engineering projects and delivering complex production plants is no easy task. Clients demand and expect nothing short of excellence, and the global engineering experts deliver. But the way from idea into reality is a tough one …

What does success look like in the EPC turnkey project management world? How about the execution of over 60 Greenfield industrial plants in more than 30 countries around the globe? That’s just the statistics of the Nuberg EPC success story. Nuberg is a global EPC company with two decades of experience in delivering single point responsibility solutions and services for industrial plants. The firm also specialises in diverse processes and technologies right from concept to project execution and beyond. It was therefore a proud moment for Nuberg when Abu Dhabi-based Al Ghaith Industries wanted to collaborate with the engineering specialists to set up a 60 TPD Greenfield chlor alkali plant. Al Ghaith Industries is a major player in the Middle East market and comprises a diverse portfolio of interests including oil and gas, construction and marine technology.

In the Gulf, clients look for excellence as a standard and that is where Nuberg EPC came in. The company was already working on projects in the region with an impressive track record of developing more than 15 chlor alkali plants worldwide, which made it the ideal choice for Al Ghaith Industries. The EPC company was expected to deliver caustic soda flakes (98 %), caustic soda lye (50 %), hydrochloric acid (32 %), liquid chlorine and sodium hypochlorite (15 %). The storage and transportation of liquid chlorine as part of the production cycle is a hazardous and potentially delicate subject. As Nuberg EPC offers solutions for chlorine derivatives, it set up a calcium chloride plant to mitigate the potential risks involved.

Next, Al Ghaith Industries decided to award another contract to Nuberg EPC. This involved the construction of a 125 TPD calcium chloride plant which would be constructed parallel to the chlor alkali plant to ensure chlorine usage. Impressed by the absolute work quality and timely delivery, Nuberg EPC was once again chosen to expand the 60 TPD chlor alkali plant to 120 TPD.

Market Insights CHLORINE ON A GROWTH CURVE Driven by a growing demand for chlorine and caustic soda for wastewater treatment as well as other chlorine-based chemicals, such as disinfectants, corrosion and scale inhibitors, coagulants, and flocculants, the chlor-alkali market will register a CAGR of almost 4 % by 2022, Businesswire analysis states. Further, the use of process equipment, such as membrane systems which require pre-treatment of water with chemicals to maintain efficiency and prevent damage, generates a steady demand for these products, market insiders assume. Another major factor are the demand for PVC from the global construction market. Yet, the high dependence of the chlor-alkali industry on electricity becomes increasingly challenging due to the non-availability of substitutes and the corresponding high operation costs of manufacturing plants.

The project was segmented into three distinct phases, each of which was planned, implemented and tested as per the client’s requirement. The first phase comprised construction of the 60 TPD chlor alkali plant which was successfully commissioned in 2015. The whole project was completed in only 18 months, sparing an entire month before contractual time. The second phase involved the 125 TPD calcium chloride plant. This project proved to be a notoriously difficult plant to deliver with many health and safety considerations among the usual project complications. However, the plant was delivered in just 16 months.

Phase three was to expand the 60 TPD chlor alkali plant to 120 TPD. The expanded production facilities were commissioned in early 2018. With delivery in only ten months, this was a record turnaround. With three phases delivered in quick succession, Nuberg EPC demonstrated that they can plan long term projects which enable clients to get on with their business of generating profits. 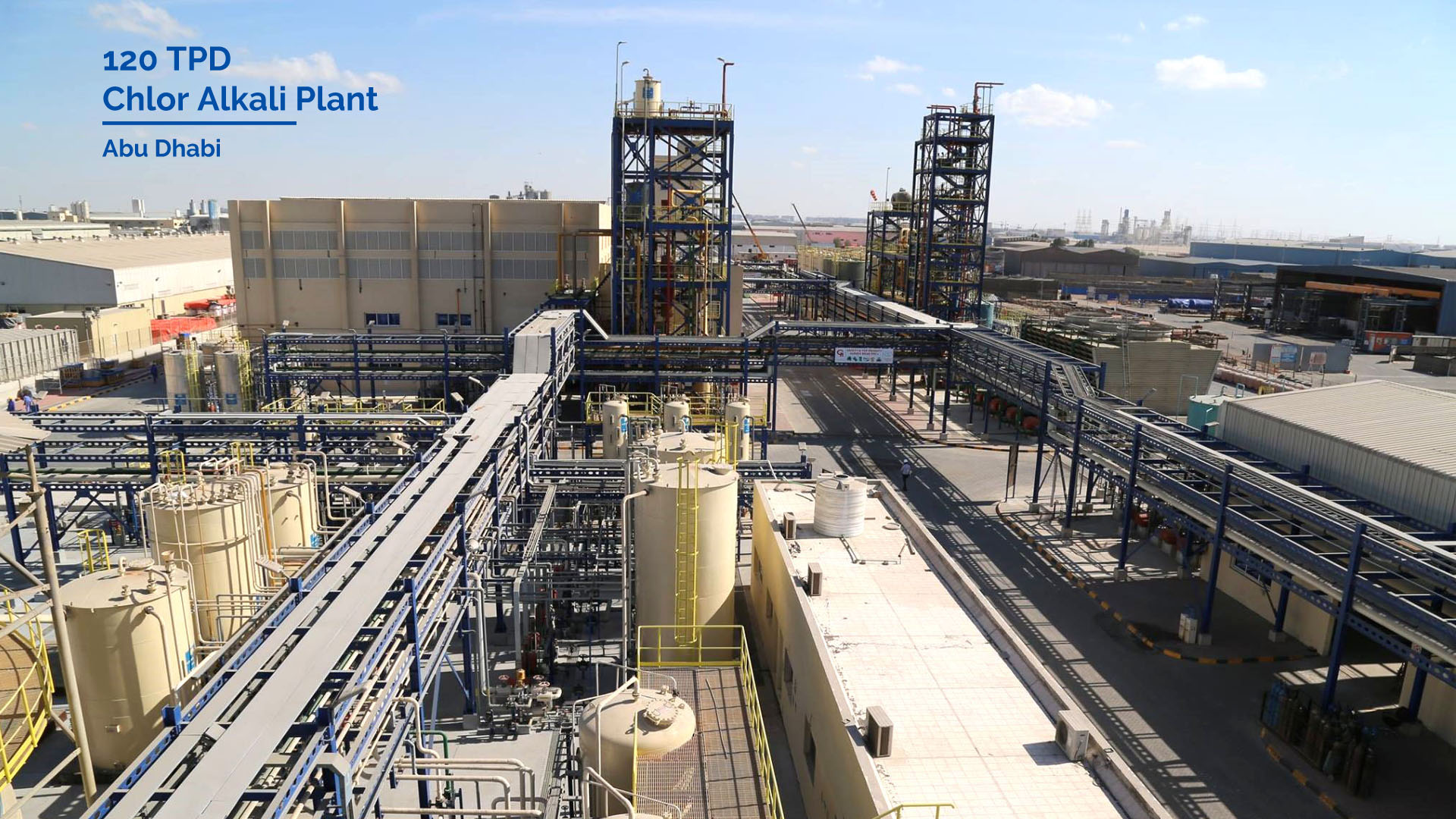 The 120 TPD chlor-alkali plant in Abu Dhabi was commissioned in 2015. Nuberg EPC delivered the project as a single point solution company.

A Project without Challenges

There were a number of challenges that needed to be understood and overcome in order to make the project a success. Taking into account that the site would be manned by multiple shifts and was operational only for 16 hours a day was another headache that the Nuberg EPC planning team needed to consider in the design of the production assets.

… Wouldn’t Be a Project

No matter if high-level planning, the clearest scope as well as a defined quantum of work, background of delivering similar plants, liaising with the client and knowing what was needed in terms of equipment was required, employees and dedicated work hours ensured project quality and ontime delivery: Nuberg’s inhouse engineering team were able to lean on their knowledge of location, terrain, ambient temperature and local atmospheric pressure while designing and engineering the project. But Nuberg EPC might not have been able to deliver three high-quality projects on time without using the latest technology.The company’s experience in technologyknow-how helped to speed up the process significantly. To fasten the pace of the project, the firm used advanced procedures such as a modular construction with skid mounted technology for the ion exchange tower, DM plant and other utilities. This helped to reduce the construction time on site considerably, the engineers state.

>> Back in 2000 Nuberg set up the first private caustic soda plant in Bangladesh. Having worked for all caustic soda manufacturers in UAE, the company is reckoned as one of the biggest EPC providers for chlor alkali in the UAE.

Off course, the EPC specialists needed the right equipment in the right place and at the right time. Getting it manufactured onsite or sourced locally was expensive and would make the project way over budget. To address this challenge, the company leant on its state-of-the-art manufacturing facility in Gujarat, India.

Here, they designed and engineered containerised equipment sizing which sped up the site erection process massively. This equipment was sensitive and essential to the project. This meant that some were refrigerated and some were fitted with ventilation, some equipment was having rubber and plastic elements, all were highly protective.

Scheduling a simultaneous, parallel and coordinated plant construction was another agenda that was handled by the management team. The first step in the process was making use of manpower to execute the project. However, the firm soon realised that the workers were not up to the mark and to solve the issue about 50–60 engineers and other supporting professionals were called to the site from the company’s Indian office.

The production materials were a mix of bespoke deliveries from the firm’s in-house fabrication facility in India and some other materials that were procured from local merchants. This kept costs low and allowed Nuberg EPC to deliver this project within budget.

The Best in all Ways

Nuberg made sure that the plant was ready for handover by carrying out Performance Test Runs (PTRs) which include elements such as plant operation in guaranteed capacity per hour and guaranteed utility consumption per hour like power, water etc. As per the contract,all performance parameters in terms of production, capacity, quality of product, plant performance and utility consumption were met as per the commitment.

© This article was first published in PROCESS WORLDWIDE, March 2019 . 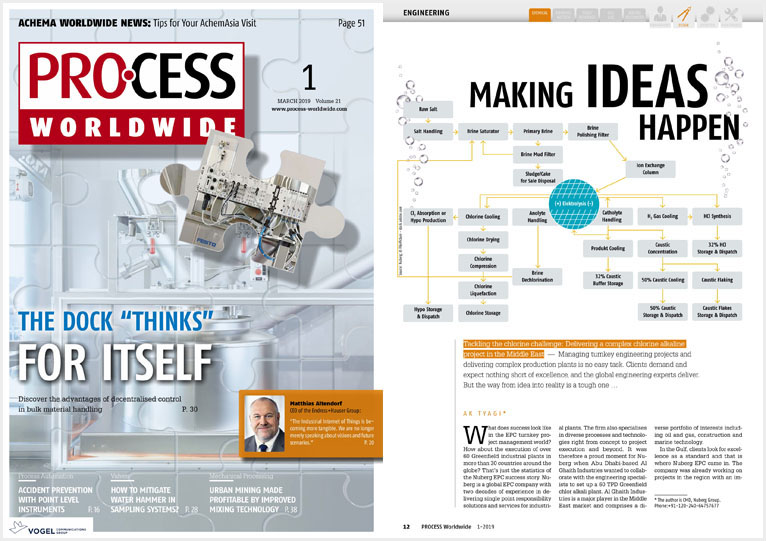