Abstract
The chlor alkali industry produces caustic soda, soda ash and chlorine which are basic commodity inorganic chemicals which find widespread uses in a variety of industries. Some amount of hydrogen is also produced in the industry. Major end use areas are in soaps & detergents, pulp & paper, textiles, aluminium processing for caustic soda and for soda ash in glass, silicate production etc apart from soaps & detergents. Major uses of chlorine are apart from usage in water purification, for the production of PVC, for many other chloro-chemicals, TDI/ MDI, polycarbonates, PO, epichlorohydrin etc. In this article the caustic soda-chlorine segments are discussed. 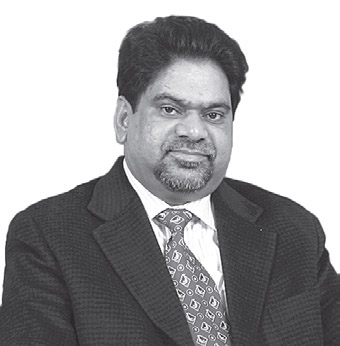 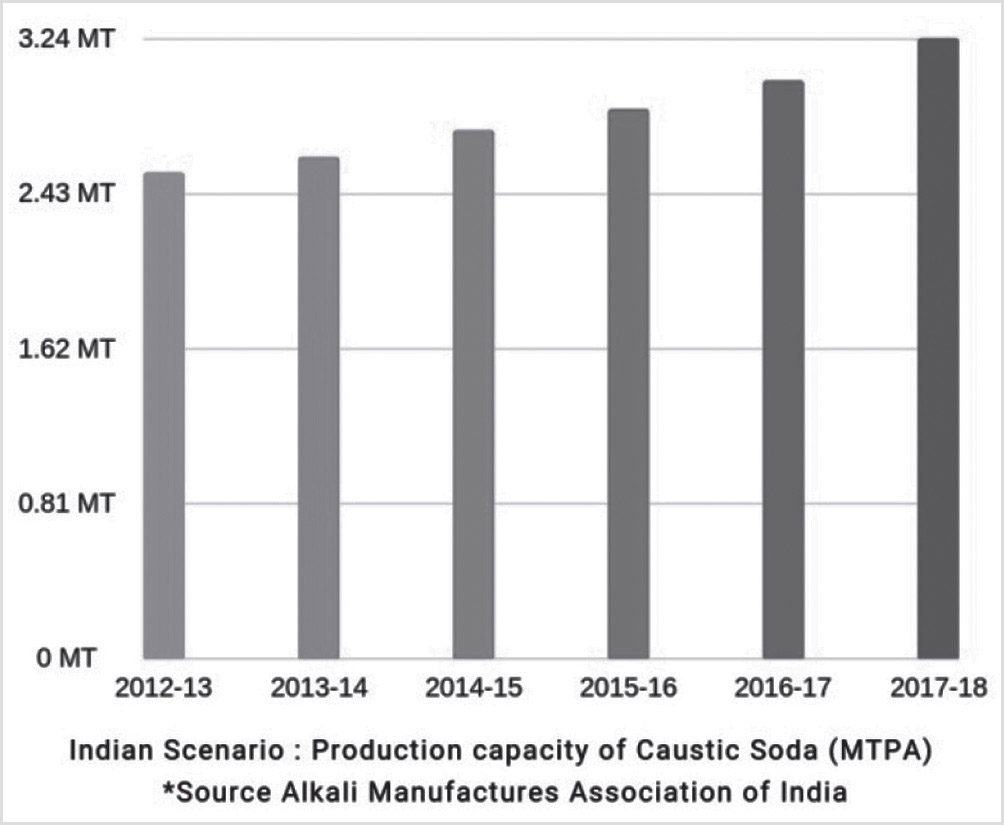 Production and Consumption figures of the Indian market

Indian caustic soda production has shown a firmed gradual growth in the past two years. As per research data provided by the Federation of Indian Chambers of Commerce and Industry (FICCI), it is assumed that the Indian caustic and chlorine industry estimated at over Rs 70 billion annually, provides employment to about 150 thousand people directly and indirectly. Currently, per capita consumption of products of chemical industry in India is about 1/10th of the world average.
Also, as per the Alkali Manufacturers Association of India, the installed capacity of the Caustic Soda as on March, 2018 was 3.88 million MT accounting to 4% share of the global capacity. Whilst, the production during the year 2017-18 was 3.24 million MT. With a marginal decline of 3.9% as compared to the previous year, the imports during the year 2017-18 was 447 thousand MT. At the same time exports during 2017- 18 was 161 thousand MT with a substantial increase of 21% compared to the previous year. On the other hand the global caustic soda capacity was 94 million MT in the year 2018; China alone having 41.4 million MT capacity reckoning 44% share of the global capacity. Looking at the huge differences in the markets there are, clearly stated opportunities for a developing country like India to infuse efforts and technologies ahead in the coming years. Ergo, the Indian industry needs to affirm its marketing and technical aspects in order to be globally competitive. 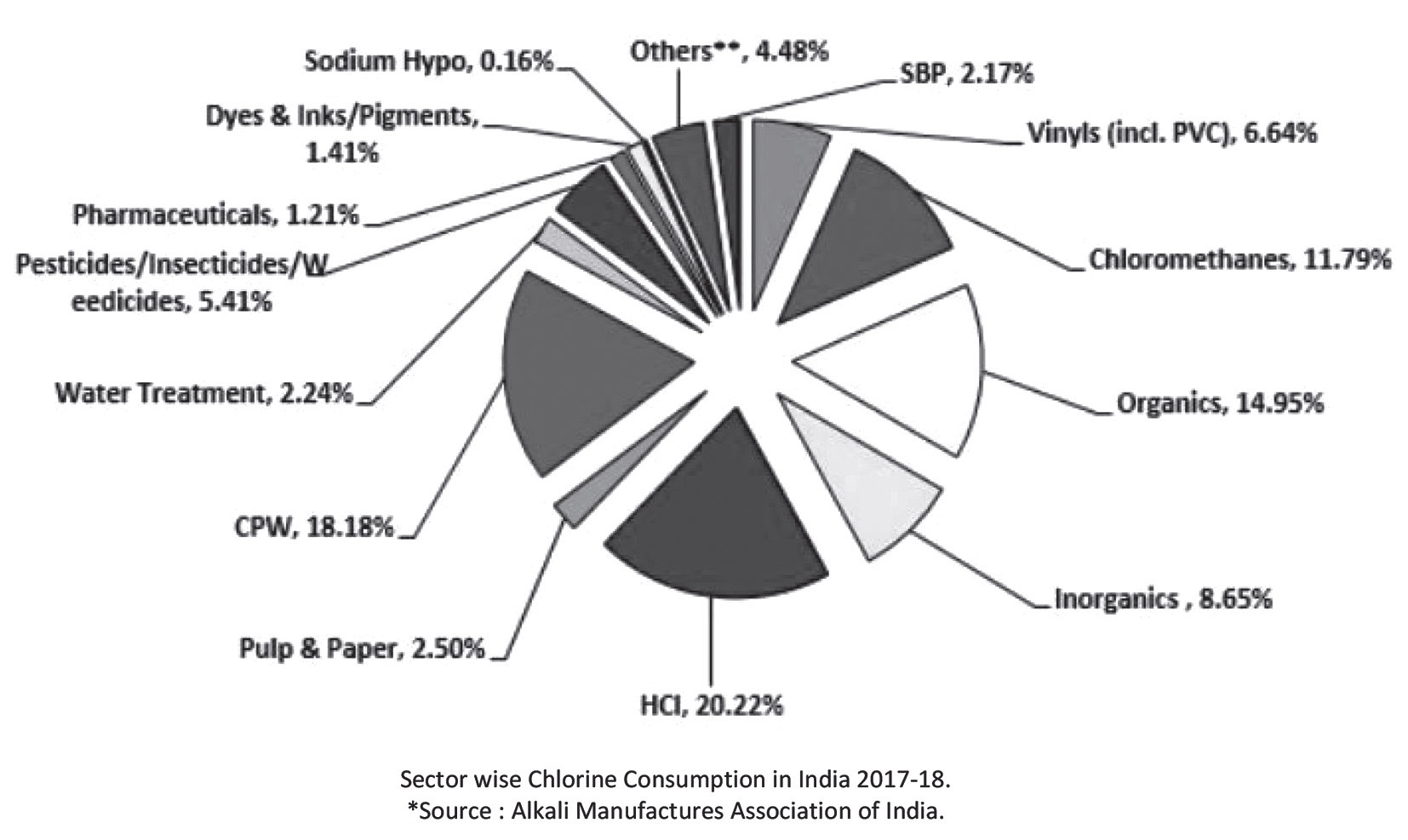 The Indian Chlor Alkali Industry majorly comprises of caustic soda, soda ash, chlorine, hydrogen and hydrochloric acid. Emphasizing upon the utility of chlorine and hydrogen, both of the elements find applications in diverse industries. In India chlorine has plenty of industrial uses that includes making bulk materials like bleached paper products, plastics such as PVC and solvents like as tetra-chloromethane, chloroform and dichloromethane. Its applications include in industries like - dyes, textiles, medicines, antiseptics, insecticides and paints. Driven by the various consuming industries, PVC one of the chlorine derivatives had a rapid growth in the country with an annual growth rate of 7.25% in the past decade. Expecting a double digit growth in the coming fiscal years, a higher demand of PVC will add to issues related to chlorine utilization in the country. 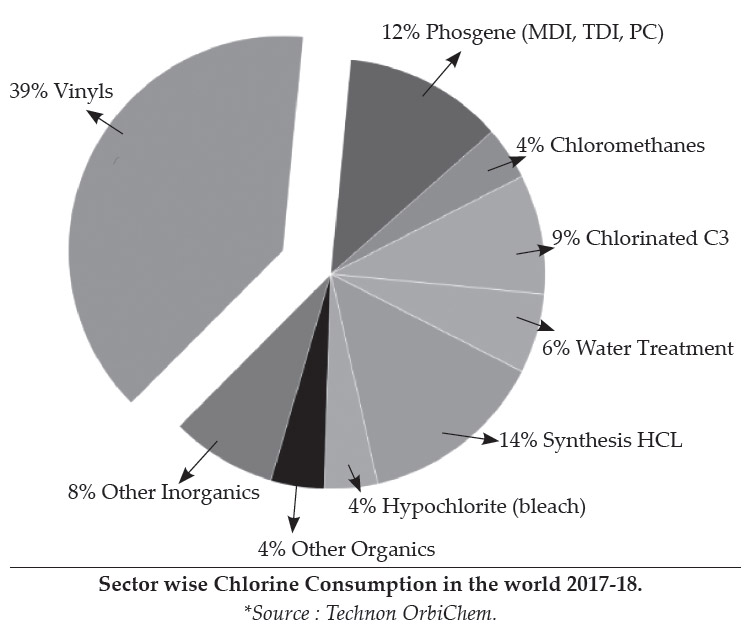 Examining the pie charts, describing sector wise chlorine consumption in India shows major consumption in the production of hydrochloric acid, chlorinated paraffin wax, organic and inorganic compounds, chloromethane, vinyls (PVC) and paper industries in the descending order. The market scenario of India is quite different when compared globally; global chlorine consumption in Vinyls (PVC) is 40% whereas it is only 6.64% in India.
When it comes to hydrogen, 45% of hydrogen produced is used for captive consumption used for fuel or other downstream products. Approximately, 25-30% is used in the production of hydrochloric acid, 15% is sold in solid form. Globally, over 95% of hydrogen is produced from hydrocarbons and about 4% is produced through electrolysis of water. Moreover, hydrogen is also produced as a by-product in the chlor alkali industry. Hydrogen gas is presently used in varied industries such as chemicals, refining, metallurgical, glass and electronic industries. Key challenge lies in the storage of hydrogen gas compared to other liquid fossil fuels since hydrogen is highly inflammable. But on the contrary, hydrogen burns as a clean fuel, producing water as a by-product that makes it an efficient energy carrier and a clean & ecologically balanced fuel. In India, on a daily basis possible applications of hydrogen includes mixing with compressed natural gas (CNG), diesel or can also be used as a fuel in the coming future. The effective utilization of chlorine and hydrogen obtained from the chlor alkali process still persists to be an unaccomplished assignment.

Amidst increasing energy cost and demands, India’s energy sector is striving to grapple with the supply and demand of the people. This can be understood as a consequence of incomplete sanctioning of the liberalized energy market and poor policy design with ineffective implementation. It is imperative for our energy policies to take into consideration the ever changing energy interdependence and their corresponding demand. As per a recent data, the primary energy consumption in India is the third biggest after China and USA with around 5.6% global share.

Expecting the petrochemical market in India to grow at a CAGR of 10% over the next 5 years to reach $100 bn by 2022, will certainly lead to more demands of other chemical inputs. Additionally, India’s caustic soda industry is seeing an average growth of 7% in the last two years, equally held back by weak demand of chlorine. PVC industry is a larger consumer of chlorine. However, key concerns of the Indian Chemical Industry pertains to small capacity of plants, higher input costs of raw materials, power, fuel, lack of world class infrastructure, ports, power supply, lack of competitiveness, cost disadvantage and also stringent labor laws. In order to achieve the global targets the Indian chemical industry requires to put serious efforts so as to improve and adapt aggressive growth with focus on exports, R&D, co-marketing alliances and up-gradation of manufacturing technology.

Global caustic soda production is held back by weak demand for chlorine, causing an imbalance in the supply versus demand. The situation may not change much in the immediate future. In India the problem is all the more aggravated with the produced chlorine not finding avenues for utilization despite demand for many chlorine derivatives. Therefore, though demand for caustic soda is buoyant in India the capacity utilization was around 80% as production is limited by the inability to find productive uses for the co-produced chlorine. Despite huge demand for PVC and other chlorine derivatives in India, domestic manufacture in these areas is lagging. Globally 40% of chlorine produced is used in PVC manufacturing, whereas in India due to limited PVC manufacturing hardly 7-8% of chlorine produced is used for PVC. Power costs in India continue to be 50 to 60% of the production costs of caustic soda and compared to the global situation this is another major challenge in India. Huge quantities of PVC are imported into the country which if manufactured in India could utilise large amounts of chlorine available cost competitively. But new PVC projects are hampered due to the dearth of ethylene.

Over 5.0 million tons of various chloro-chemicals worth US$ 4.0 billion are being imported into India annually. This data is only for some key chemicals; many small intermediates, etc are not even captured. Hence, enormous potential exists in India to develop the chloro- chemicals industry and produce these within India, by judiciously utilizing surplus available chlorine.

For new caustic soda projects, downstream integration is recommended from the beginning as it allows planning infrastructure (e.g. utility I offsites) for downstream plants and save on additional spending later on.

Indian industry need to focus on inorganic chemicals like trichloroethylene, poly aluminium chloride and other chlorine based water treatment chemicals as the demand for water treatment is growing. For PVC, ethylene imports from US and Europe may be explored.

Chlorine pipeline transfer will be an important step towards prosperity of chlor alkali industry facilitating bulk off take of chlorine.

The technology of manufacturing has majorly shifted world over towards the membrane cell process from the diaphragm and mercury cell process. The mercury cell process is not at all preferred due to the problem of mercury pollution. The global caustic-chlorine technology share in 2017 is: membrane - 78%, diaphragm - 14%, mercury - 4%, others - 4%. This is expected to shift by 2022: membrane - 80%, diaphragm - 13%, mercury - 2%, others - 5%. The processes are electrolytic and are high energy consuming. However, continuous development in the membrane process has led to significant reduction in energy consumption, though energy continues to be a major input.
In India, the entire capacity is based on the latest energy efficient, clean, state of the art membrane technology. India is 2nd to Japan in the world in adoption of latest membrane process.
Currently, Chlor Alkali plants are based on Bipolar Membrane Cell Technology Electrolyzer. It is environmentally safe, most used and is in continuous evolution extensively worldwide.

1. Ceramic filters
Traditionally, brine filtration is a two stage process which includes primary filtration stage and secondary filtration stage. Primary stage removes major impuritie from brine in the form of sludge and secondary helps in ultra-high purification and ionization of brine before being fed to the electrolyzer. Filtration is a highly used process and is most preferred for brine, however, serious problems like clarifier maintenance and large energy consumption are encountered during the primary stage leading to delayed work process and high maintenance cost. Ceramic filter is a single stage filtration process which maintains brine quality and handles almost all problems in primary filtration. The compact process can filter up to sub micron level and is a time and space saving process. Ceramic filtration process does not require clarifier, anthracite, pre-coat systems and dosing of pre-coat media in turn reducing much of the operation and maintenance cost.

3. Skid mounted technology
Industry evolution is driving the need for small capacity chlorine plants. Liquid chlorine transportation is becoming more difficult and expensive. Chlorine and caustic are the building blocks for industries and in remote areas, securing supplies of chlorine and caustic is becoming a key target for chemical companies. Solution to all these requirements is based on standardized, pre-assembled and skid-mounted chlorine plants.
Cost reduction for skid mounted plants is the result of a multi-disciplinary approach: standardization of skid engineering, process simplification, selection of materials, equipment and manufacturers. Skids can be installed in different configurations, from salt to hypochlorite or hydrochloric acid plants to liquid chlorine production. And individual skids can be installed on existing plants for modernization or debottlenecking.

This article was first published in Chemical Industry Digest - January 2019.